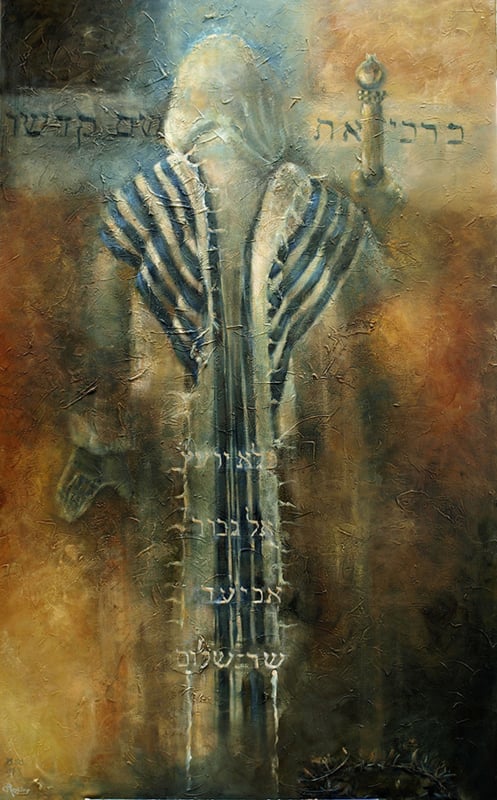 This painting is a combination of psalm 103 and Isaiah 9.
Both passages speak about the qualities and names of God, which are brought together in the ‘servant of the Lord’, Jesus Christ.

He is the central person in this painting, shrouded in a prayer mantle.

On the top, from right to left is written in Hebrew: Praise to his holy name.

In the skirt of the prayer mantle is written in Hebrew (from top to bottom) the names of the Son who shall come – as prophesied by Isaiah (Is. 9: 5,6):

He doesn’t punish us as our sins deserve

He doesn't; punish us as our sins deserve.

How great is God’s love for all who worship him?

Greater than the distance

between heaven and earth!

How far has the Lord taken

our sins from us?

Farther than the distance

from east to west!

Heaven/earth, east/west make a cross.
The place he took to deliver us from our sin.

You can see the cross vaguely in the background and the vertical line of the cross is carried through up until the prayer mantle with the names of Jesus Christ.

Also there are symbols which represent the names:

The prayer mantle symbolizes the ‘counselor’ and ‘priest’.

The rod depicts his reign, his kingship.

The pomegrate is in the ancient Israel the sign of ‘holiness’.
The priest wore a robe with at the bottom a rim with woven pomegrates.

The left hand reminds of a father who leads his child, a invitation to follow Him.

At the bottom on the right there is a crown of thorns, the sign of his subsidiary suffering. The symbol of a strong God, who dared to become weak.

At the four ends of the prayer mantle there are four tassels.
This means: remember what God did for you.
On the painting the long tassels are depicted in the middle and express the words: “…never forget how kind he has been”. (Ps 103:2)